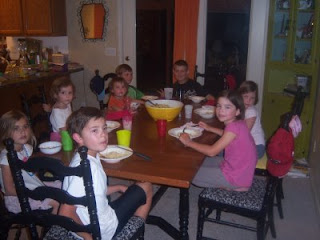 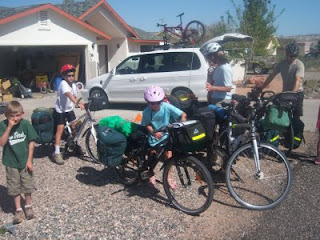 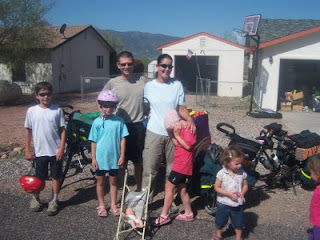 Here an interesting story... a while ago I was driving home and noticed a family bicycling down the road. Normally I would not really think to much about that, but they had small children and their bikes were loaded down with packs and traveling gear. Well I was very interested in what they were doing, so I turned around and stopped to ask what they were doing and where they were going.... Well come to find out through their heavy french accents, they were bicycling from Cancun Mexico to Canada.....WITH THEIR 4SMALL CHILDREN.....I was shocked. I have 4 small children and I could not imagine this venture. Their 11 and 8yr old rode his own bike, their 5 yr old was on a tandem behind her dad and the 2 yr old was in a bike trailer, being pulled by the mom. I could not even imagine my family doing this, my 2 yr old would not sit in a trailer all day. The trip was going to take 6 months... wow!

Well of course i was very interested and asked where they slept, and they said along side the road or just at interested peoples house that offer.... well, since I was so interested, i said," come on over to my house and you can spend the night and have dinner". Not remembering that my house was a complete disaster(as usual) and i needed to hurry and warn my husband coming home from work, that their was a french family staying at our house for the night. oh well, it ended up being very fun and was great to meet such nice adventurous people. the children did not speak English, and my daughter keep asking why they would not talk to her... they don't understand you, honey! But we could understand the couple, Marie and Fred.

We had a great dinner and they slept out in our tent camper, they showered and updated their blog... which I have been trying to follow to see where they are now, but its all in french. (if anyone knows how i can get their blog translated, let me know), and of course they offered, when ever we go to France to come stay with them... that would be fun.
Normally I would have never stopped, my husband is a police officer and he would have freaked, but now I'm so glad I did, I would have never got to meet such a sweet family, that really was just like mine, just much, much, more adventurous.
Posted by summer at 8:03 AM

I don't know ...I think you are pretty adventurous! I know I'm not as brave as you...I definitely could not have invited complete strangers to my messy house!

Sum, to translate the Frenchies blog just pull it up, right click and select "page info" and select "translate into english"
-Your brother 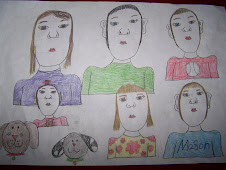